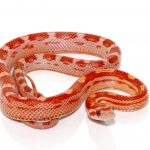 Corn snakes are a very commonly kept pet snake originally from the southern states in the USA. They were given their name because they were commonly found hunting mice in corn stores. They are considered harmless to humans and have a very important role in controlling rodent populations particularly around farms. Corn snakes are probably […]

We Have Changed Our Hours Temporarily To Monday - Saturday: 9am - 5pm Sunday: CLOSED We Hope To Be Back To Normal Soon. Stay Safe, Stay At Home & We Can Deliver To Your Doorstep Free Of Charge (Tavistock & Surrounding Areas)